OAKLAND COUNTY, Michigan — If 91 base-10 digits are chosen at random, what is the probability that some of the digits can form a number x with n digits, and the rest can form a number b with (91-n) digits such that x = b2? (Note: x and b cannot begin with the digit 0.)

If you don’t know the answer to that problem, join the club. If you do know the answer, join the Math Club, which was resurrected at Oakland Community College’s Royal Oak campus just before Thanksgiving by Faculty members Jeff Parent and Dan Puig-Pey, in the math department. 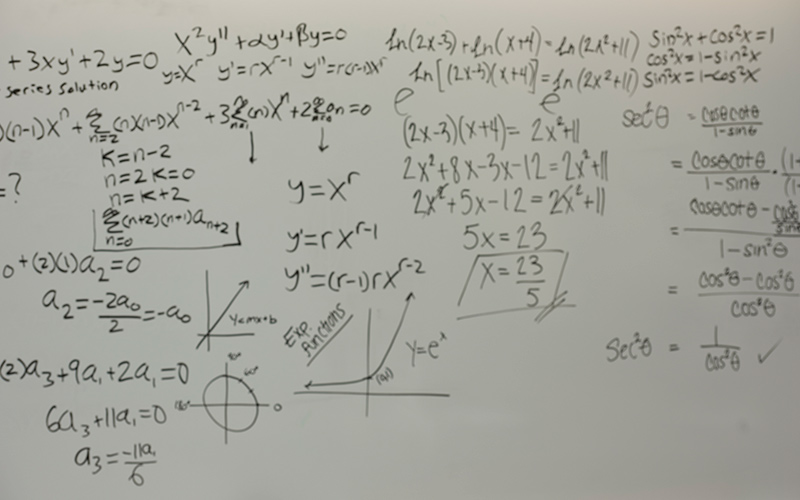 While you’re employing fingers and toes to calculate that one, consider that 27 students attended the initial gathering of the Math Club, during which the discussion centered on the history of calculating devices, from the abacus of 2000-plus years ago to modern-day tools such as Mathematica. Students also learned how to multiply 164x25. Which seems like a pretty pedestrian equation for this crowd. Only they did it using a slide rule. (Google it.)

Parent also shared with the club one of the first handheld calculators, the Texas Instruments SR-10. The device was purchased for $150 back in 1975 by OCC Professor Emeritus Marv Parent, Jeff’s father. In its time, the calculator was a big hit on the Auburn Hills campus, where the elder Parent taught chemistry. “People would come from all over campus to borrow it,” his son recalls.

Parent says the Math Club was the product of a couple of factors. One was the annual contest put on by the American Mathematical Association of Two-Year Colleges. Students would gather to go over the questions, a couple of which you’ve already stumbled over. Then there’s the fact that, as Parent puts it, math “is a recreation for us.” So much so that when you have only X amount of time in the classroom and X+X topics of conversation, you need to, well, you do the math. And the you do a math club.

The next meeting of The OCC Math Club will be in late January or early February, which provides plenty of time to determine how many distinct eight-digit numbers can be formed by selecting and arranging eight digits, without replacement, from the string “1234455666.” Thankfully, this doesn’t involve two trains traveling toward each other at different speeds.