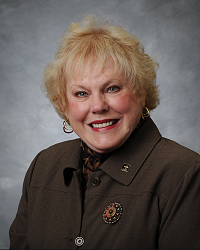 Shirley Bryant has been on the Oakland Community College Board of Trustees since 2008 and has served as chair and vice chair.

Ms. Bryant is a retired Executive Director of Community Relations for Birmingham Public Schools. In 2007, Ms. Bryant was inducted into the Eastern Michigan University College of Education Hall of Fame. This was a result of her long-standing commitment to education in the community. She also has received other awards including “The Athena Award” by the Birmingham-Bloomfield Chamber of Commerce and named a “Woman of Achievement” by the Anti-Defamation League.

During her long-standing educational career, she also served as Community Education Coordinator, adult education teacher for the Troy Public Schools and an English teacher. In addition, she was an adjunct faculty member for the University of Michigan-Dearborn.