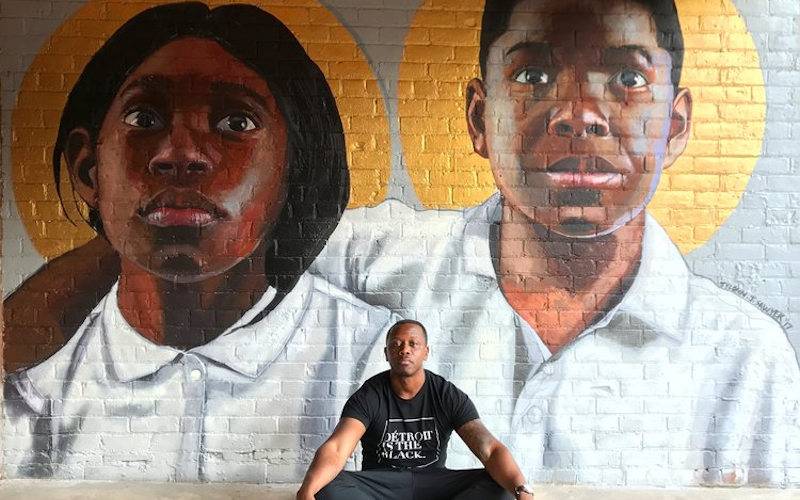 An art professor and mentor at Eastern Michigan University set Tylonn Sawyer on a path to become a full-time artist and, coincidentally, a faculty educator himself. That early counsel set the trajectory for a, then, uncertain student and, today, a newly awarded 2019 Kresge Artist Fellow recognized for his creative vision and commitment to excellence.

OCC faculty member Tylonn Sawyer is a figurative artist whose work centers on themes of individual and collective identity, politics, race, history and pop culture. His path to becoming a Kresge Artist Fellow was explorative and formative with significant twists and turns along the journey.

"My father was a show-car designer and I grew up drawing, so I was always interested in art,” Sawyer said. “But I didn’t realize I could make a living in it until a professor at EMU showed me what a career as an artist could be like. That mentoring and pragmatic view gave me the confidence to pursue my passion.”

After a reset from a mix of general education, CAD and exploring various art classes, Sawyer earned his bachelor’s degree in fine art from EMU. He then moved to New York to pursue a master of fine arts in painting from the New York Academy of Art. He stretched his insights with an independent study at the Royal Academy of Art in London.

He worked hard to earn the requisite knowledge and then propelled himself into an art career in New York. But the city proved to be a tough canvas for a budding artist and he moved back to Detroit. Eventually, Sawyer landed a job as a mental health associate for a psychiatric hospital that paid well but took him away from his artistic pursuits.

“I spent eight years in corporate America. The job and the money were good, but I didn’t have the time to make art,” he said. “In 2011, I got laid off and, while it is cliché to say, it really was the best thing that ever happened to me.”

From that pivotal moment, Sawyer spent all his energy creating and teaching art. He found Detroit’s art scene was much different from New York and London. According to Sawyer, Detroit has always had a robust art scene but art influencers didn’t look at it as a key art center.

“Detroit is a blue-collar city and local artists often reflect this in their art. They really get down and make things. Their work is groundbreaking. It is different from what you see anywhere else. With the resurgence of Detroit, the art world is starting to take notice.”

That notice is not lost on artists like Sawyer whose work has been included in numerous exhibitions throughout the United States and abroad including the 55th International Venice Biennale Art Exhibition in Venice, Italy; the Rush Art Galleries in New York; and two solo exhibitions at N’Namdi Center for Contemporary Art in Detroit.

He who was mentored is now mentoring.

Sawyer now teaches at OCC, inspiring others to use their imagination and personalize their experiences through art. His teaching philosophy is somewhat different from traditional art teachers.

“A lot of teachers use the house style method of teaching and instruct students to draw exactly like they do,” he said. “Unfortunately, for me this is ‘sage on the stage,’ a very subjective way to teach art that can often turn students off and their retention level gets low.”

In his classes, including Basic Drawing and Oil Painting, Sawyer provides his students with the fundamentals of how to draw something and then empowers them to personalize it.

“There are millions of ways to draw an apple, so once I teach my students the foundational rules to draw  it, I encourage them to use their imagination to draw that apple as they envision it. It sets the stage for great art that matters.”

Through the Kresge Foundation fellowship, Sawyer receives a $25,000 unrestricted award and a year of professional practice to extend his palette making art and teaching. This summer, he participated in an intensive professional development retreat with his cohort of 20 awardees in support of their practice and foster their work.

The Kresge Foundation recognizes individual artists matter to the vitality of the community.

In addition to teaching, Sawyer has received great recognition for his work including one of his favorite pieces, “Pieta,” a large oil on canvas painting featured in the “American Gods” exhibit at the N’Namdi Center for Contemporary Art in Detroit. It is his adaptation of the famous Michelangelo sculpture of the same name.

Over the last few years, he has created large public murals and more collaborative projects. His mural on Midtown’s Whole Foods store is one of his most recognized. It depicts an African-American boy sitting in the same position as the iconic Spirit of Detroit, hovering over the city and a colorful display of fresh vegetables. He has also completed works for Redbull, Quicken Loans Corporation, Under Armor, Murals in the Market International Festival at Eastern Market, Detroit’s Museum of Contemporary Art and The Detroit Institute of Arts.

What’s in the future for Sawyer?

Sawyers love of teaching and creating art will continue to play an important part of his career, but he is looking at accomplishing even more in the future.

“While being named a Kresge Artist Fellow by my peers is very gratifying, it will be a launching pad for even bigger accomplishments.”

For more information about Tylonn Sawyer and to view his works, visit http://www.tylonn-j-sawyer.com/.