Named an OCC Outstanding Faculty Member and Diversity Champion, English professor Eric Abbey’s accomplishments extend beyond the classroom. By day, Abbey has been inspiring Oakland Community College students for nearly 2 decades, encouraging them to write and explore their interests and passions. After hours, he lives by this same creed.

A professional musician and producer, Abbey has been performing Jamaican influenced music such as ska, reggae, and dub since 1994. He has toured Japan and played shows in England. 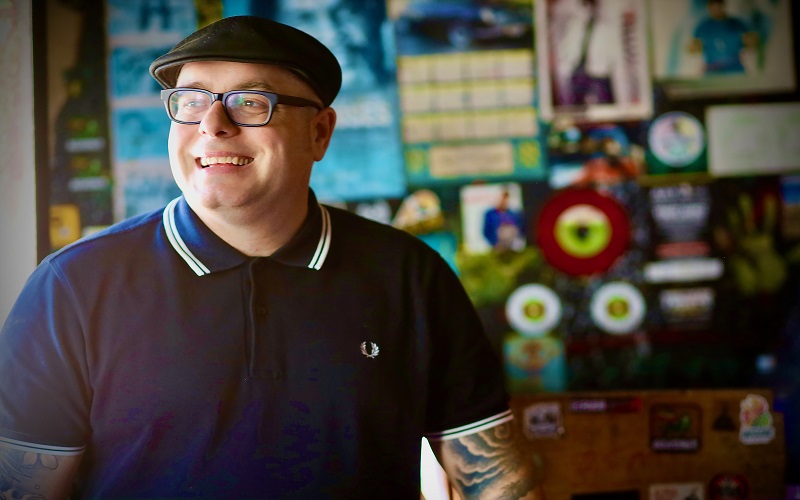 When he went back to school and completed his Ph.D. in 2019 from Wayne State University in English-Film and Media Studies, he wanted to write about and study the Jamaican culture and music he holds dear to his heart. This experience led him to write his latest book Distillation of Sound: Dub and the Creation of Culture. The book explores how dub reggae expanded and shifted Jamaican culture.

“I was able to visit and work at the University of the West Indies in Kingston, JA and to also record in one of the most iconic studios in Kingston,” Abbey said. “I met foundation artists and interviewed many people for the book. I decided to write this book to honor these artists and dig into how music creates, effects, and changes culture.”

Abbey said it amazes him to this day that such a small island has impacted the entire world with its music.

“This book is my attempt to bring focus on specific albums that I believe are pivotal to this influence. Dub music, in general, deserves much more focus in the music community for its inspiration and continued influence on the music world.”

The prerelease in January of Distillation of Sound: Dub and the Creation of Culture landed at Number 1 on the Amazon charts. It is scheduled to be published in March, 2022.

Abbey has published two other books on music and cultural criticism, along with two textbooks that are used at OCC:  Garage Rock and Its Roots: Musical Rebels and the Drive for Individuality was published in 2006 and Hardcore, Punk, and other Junk: Aggressive Sounds in Contemporary Music came out in 2014. The textbooks Writing and Arguing Pop Culture and Writing and Arguing About Music were both published in 2020.