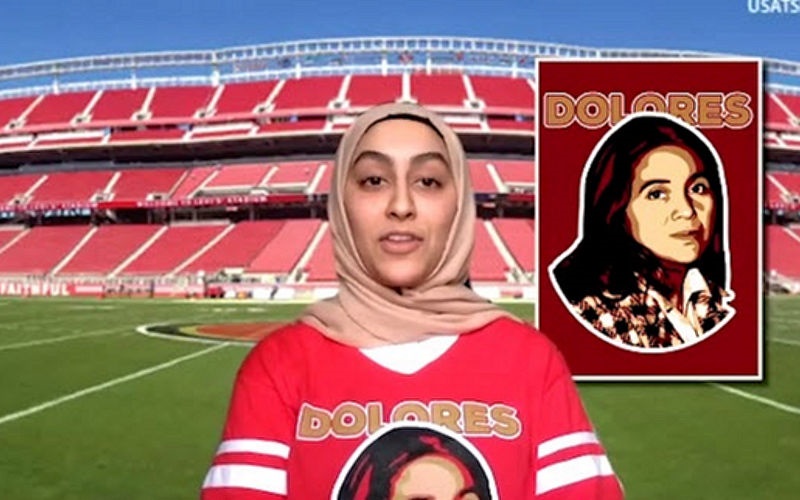 The NFL Draft is one of the most popular events to watch each year, but this year it took on a different meaning for OCC student Sana Ishaqsei, her team members and coach. Ishaqsei was one of 32 students from colleges and universities across the country selected to participate in the inaugural NFL360 Women’s Empowerment Draft.

Huerta is an American labor leader and civil rights activist who co-founded the National Farmworkers Association, which later became the United Farm Workers, with Cesar Chavez. Ishaqsei wore an NFL-style jersey featuring a portrait of Huerta as she described Huerta’s life and contributions.

“I am very impressed with how Sana represented OCC. She performed well during the audition process, and appears in both the long and short versions of the Women’s Empowerment Draft,” said Bennett.

Ishaqsei appears at approximately the 17 second mark of the short video and 20:58 of the full video. She is a member of the OCC Forensic Team, and part of the Oakland Early College (OEC) program.  OEC blends high school and college into a multi-year program combining high school graduation with an OCC associate degree in grade 13.

“It was such a cool opportunity to participate in the Women’s Empowerment Draft, and I appreciate being nominated by Ms. Bennett,” said Ishaqsei.

The Women’s Empowerment Draft is a collaboration between the NFL Network and a group of Alfred University  students dubbed Art Force 5 (AF5) , who use art to inspire discussion on topics of equality and social justice.