Earning a college degree can be one of the greatest achievements of a person’s life. But colleges nationwide are finding that many students who complete the requirements aren’t taking the steps needed to be awarded the official degree. They are among students known as the “some college, no degree” population, and according to a recent publication by the National Student Clearinghouse, there are more than 1 million of these students in Michigan.

Why students are not receiving the degrees they’ve earned is a trend that OCC is a working to remedy. The college is on the forefront of the Degrees When Due initiative being led by the Institute for Higher Education Policy. 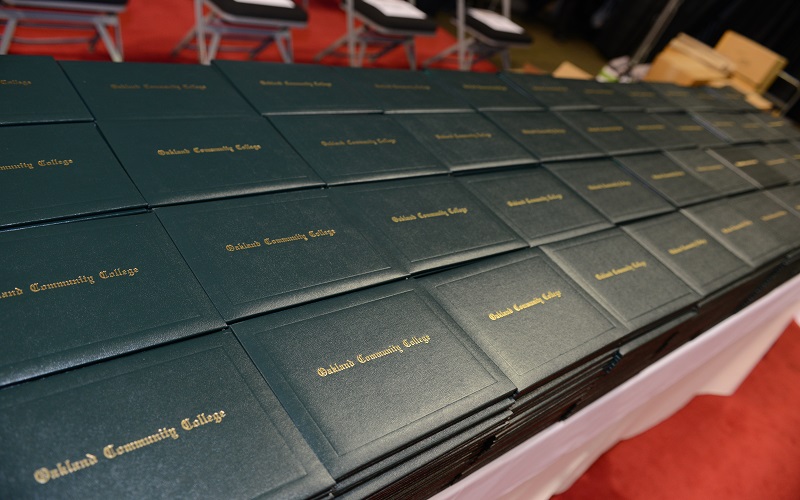 OCC Registrar Stephen Linden was recently quoted in a national news article on the higher education website, EdSurge.com, which highlighted the “4 Reasons Why Students Don’t Receive the Degrees They’ve Earned” and looks at this initiative.

Linden says there are a number of reasons why some students “stop-out” (students who stop attending OCC for a variety of reasons and do not transfer to another institution) and don’t receive their degree:

To help bridge this degree-award gap, Linden said the College has recently identified 900 students who, in a six-year window of time, earned a degree but never had it posted to their records. These students have also never earned a degree anywhere else. These stop-out students were sent a certified letter indicating they have met all graduation requirements for one or more degrees, their earned credentials will be posted to their student records and diplomas will be mailed directly – unless they specifically request otherwise.

In addition to this initiative, OCC is also working to improve automated systems to better flag a student record when the student has qualified for a credential in real-time and ensure students reap the benefits of their efforts sooner, Linden said.

“While helping students complete the degree they are pursuing is the ultimate goal of completion efforts, it is very rewarding to let them know they completed a degree they didn’t expect.”

Re-engagement efforts with Degrees When Due will continue in 2020. OCC will be contacting hundreds more “some college, no degree” students who are one or two courses away from degree completion with the hope these students will return to OCC to complete those final courses. Students who have left the area can complete OCC online courses, or even take them at another nearby community college or university and transfer these final credits back to the College.

Linden said there are many completion pathways former students can follow, and OCC is committed to empowering students and guide them to exploring the many options available that work best for them.

If you believe you have earned a degree from OCC that was never officially awarded, you can speak to an OCC counselor at any campus about degree completion and remaining requirements.