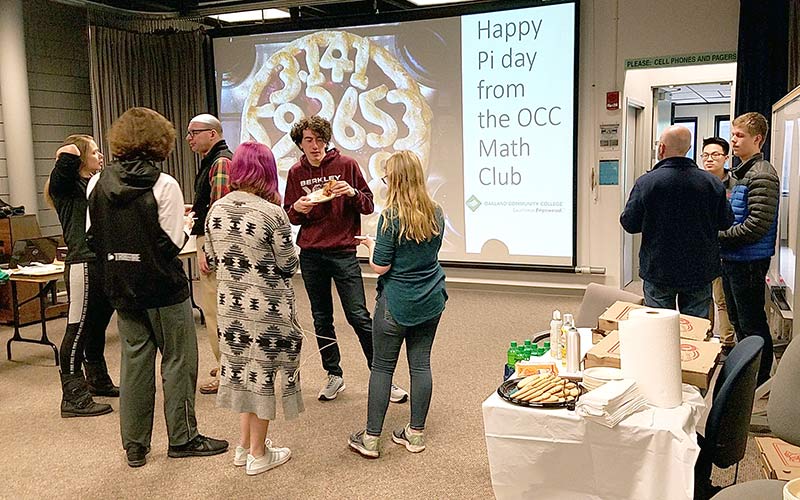 OAKLAND COUNTY, Michigan — When the Oakland Community College Math Club celebrated Pi Day this month, it decided to invite a circle of friends from two nearby schools to pay tribute to that most iconic of mathematical constants.

Besides OCC students and staff, visitors from Berkley and Madison Heights Lamphere high schools devoted a piece of their March 14 — a.k.a. 3-14 — to the infinite joys of pi. One of those joys being, for Berkley students, 3.14 points of extra credit for attending.

Festivities began with a three-minute (Yes, it was 3 minutes and 14 seconds, if you must be precise.) video featuring Matt Parker, a frequent guest on the YouTube Numberphile channel. With a touch of irreverence, Parker estimated the ratio of the circumference of a circle to its diameter (the classic way to define pi) by using actual pies.

Best-selling author Simon Singh, whose works include The Simpsons and their Mathematical Secrets, sent a “Happy Pi Day” video as the afterglow to the Math Club’s sharing of pi jokes and some pi history.

The main course was testing of one’s pi-memorizing prowess. The three top scores were OCC students Charbel Yammine, who memorized 60 digits after the decimal point in pi, and Levon Alshabi, who recalled 54; and Tim De Zwaan from Lamphere High, who remembered 52 digits.