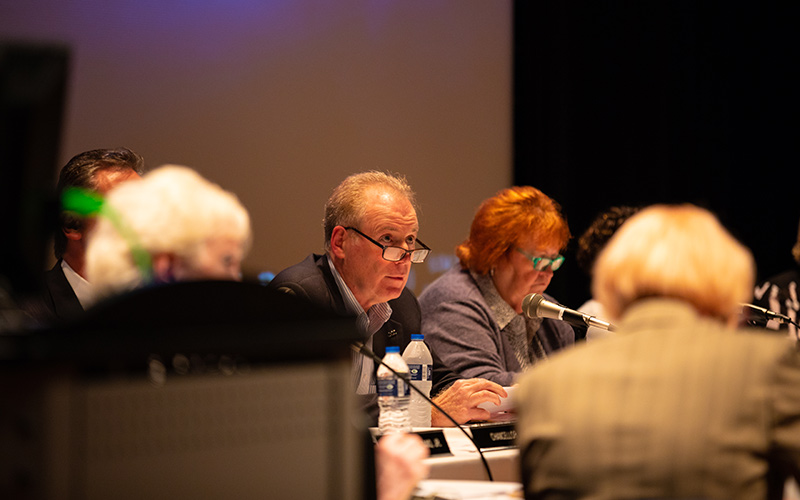 OAKLAND COUNTY, Michigan — John McCulloch of Royal Oak was re-elected chair of the Oakland Community College Board of Trustees by his fellow board members during the board’s first meeting of the new year. Re-elected to a two-year term as vice chair was Pamala Davis of Clawson, secretary Pamela Jackson of Commerce Township, and treasurer Susan Anderson of Royal Oak.

McCulloch, a trustee since 2014 and chair of the OCC board since 2017, is currently an executive consultant for APM Enterprises in Royal Oak, where he advises companies and municipalities regarding acquisitions, business development, organizational alignment and improvement, and fiduciary compliance. His previous public service includes 10 years on the Oakland County Board of Commissioners, five of those years as board chair.

Davis, whom voters re-elected to a new six-year term in November 2018 and a retired a code enforcement officer for the city of Royal Oak and former adult-education teacher, has been a trustee since 1994 and is currently the longest-serving member of the board.

Jackson, newly elected by voters in 2016, is a retired OCC faculty member and consultant/owner of Fresh Perspectives specializing in construction, historic restoration, renovations and prison education.

Anderson was also re-elected to treasurer. She was elected to the board in 2016, and owns SE Anderson & Associates LLC.

Other board members continuing as trustees at large are:

The seven members of the OCC board of trustees are elected on a nonpartisan, at-large basis by voters living within the college district, an area that generally coincides with the boundaries of Oakland County. Trustees serve as volunteers and are not paid for their services.

For additional information on the board visit, oaklandcc.edu/about/board-of-trustees.